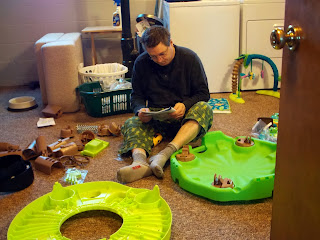 Grandfoal gotted two of this thingie, one for his house, one for ours too... 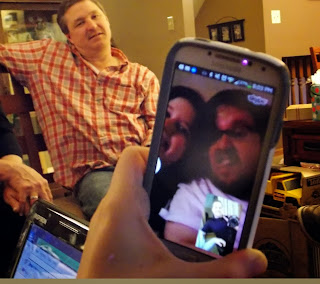 Adam & Ashley even came from Alaska via Skype. That helped Mom lots. 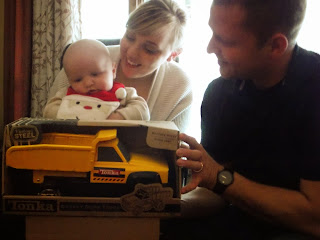 Grampa got Grandfoal started on a tradition....He can't play with it yet of course but, by the time he can he'll have a good collection started. 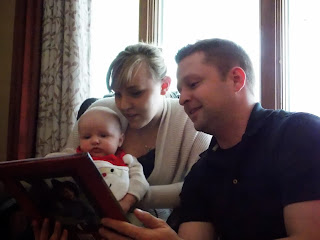 Lots of books for Grandfoal, Noni The Pony, Tex an several other horsey adventures... 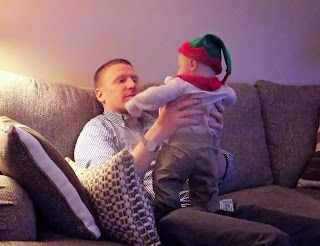 Jillian's honey Jesse gets some practice for an elf of his own someday even... 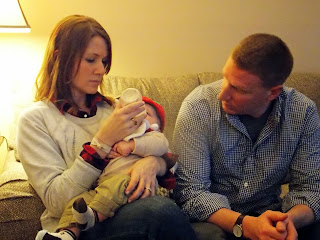 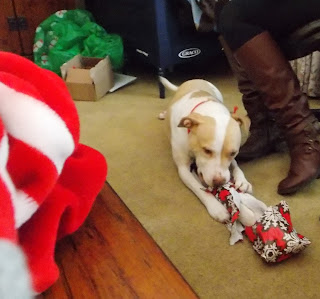 Emily helped Mom from missing Tye.  Tradition had it that Tye helped everyone unwrap gifts. 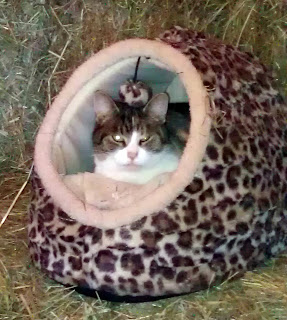 Down in the barn Margeaux N Maizee got nice snuggly beds.  Margeaux knew right away what these were for! 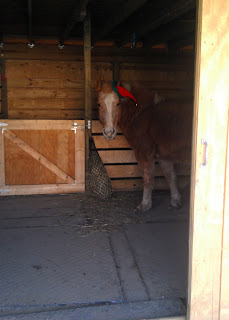 Not overly fond of the elf hat thing, but.... 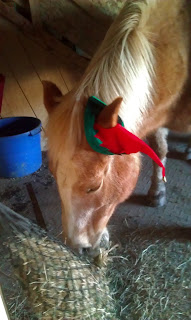 It did net me a net filled with hay Christmas morning!  Lots of yummy snack-a-roo stuff too!  Santa knows the way to my heart is thru my belly after all!!! 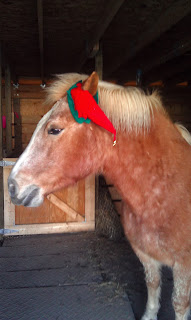 Lots of Horse-felt wishes for all
"HAPPY EVERYTHING, MERRY ALWAYS"
Later
Posted by Camryn at 10:24 AM 6 comments:

Camryn here:
Mom says that here in Ohio if you don't like the weather just wait 5 minutes cause it's sure to change... 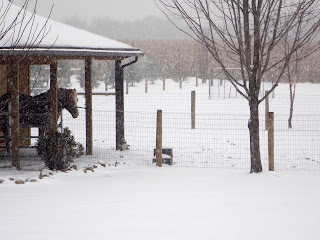 She's very right, one day I'm standing on the patio in a Winter Wonderland... 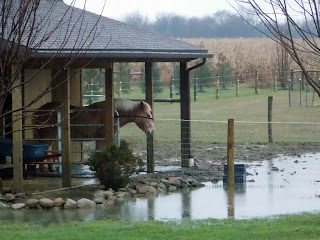 Then it's this!!!!  SIGH, least I gots my nice dry patio!!!  They'd been told this place doesn't flood!!! "WRONG", my patio n barn are dry though.  Dad is planning some trenching and drain pipes come summer time to keep my dryer next year.
Meanwhile in the house... 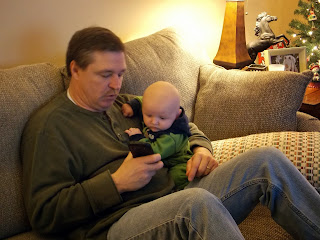 Grandfoal explains how a smartphone works to Dad aka Grampa 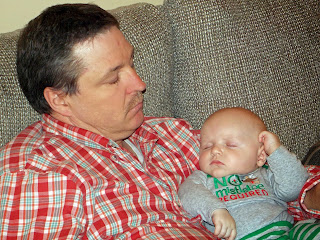 Later they take a snooze together.  Biggify to read Lincolns shirt, to cute.
Grampa aka Dad needed some help with diaper changing (reason for both having differant clothes on during their snooze.  Poor Mom she laughed so hard at Dad she nearly peed herself even!!!  Mom was downstairs when she heard Dad calling for her that Lincoln had pooed.  She runs up to see Dad holding a near naked Lincoln up over the diaper change table.  Dad didn't realize that Lincoln wasn't quite done yet when he removed the diaper.  Soooo, Mom had to clean Lincoln's bum midair as he continued on with his business (he had a lot of business).  While this was going on, Lincoln peed all over Dad!!!  Dad goes to put him down on the changing table "on the dirty diaper", Mom stopped this.  Dad then began backing away from the table, with poo still being produced Mom stopped this too.  She told Dad to deal with it till she got it done, course she was hard to understand as she was laughing/crying at the same time!  Poor Dad, he gotted baptised good!!!
Later on Mom n Jillian went to play "Say Yes to the Dress".  Yep, they went wedding gown shopping.  Jillian n Jesse are in town for the holiday, they met Jillians StepMom along with two of Jillian's bestest buds at the Wedding Gown store.  Jillian only planned to narrow down the style she liked best with their help.  But, as fate would have it Jillian found "THE DRESS".  So exciting, her and the dress was a perfect match, sorry no pix cause what if Jesse for some reason looked at my blog and ruined the "groom doesn't see the dress till the wedding?"  No date set yet since Jesse be a Marine and their not sure where they'll be moving to next year.
Later
Posted by Camryn at 7:42 AM 4 comments:

Camryn here:
Mom was all worried bout the winds n stuff here at the new place.  At the old place I generally chose to stand outside despite wind>snow>rain or whatever else the weather mans might throw my way.
She worried that I wouldn't use my patio and/or the door Dad put in for me to go in and out whenever I wanted.  Her discussed getting me a rain coat with my trimmer, Sherry told her if I needed to be inside I'd go inside.  That no intelligent horse would choose being out over their own well being and that I'm an intelligent horse.  So right you are Sherry... 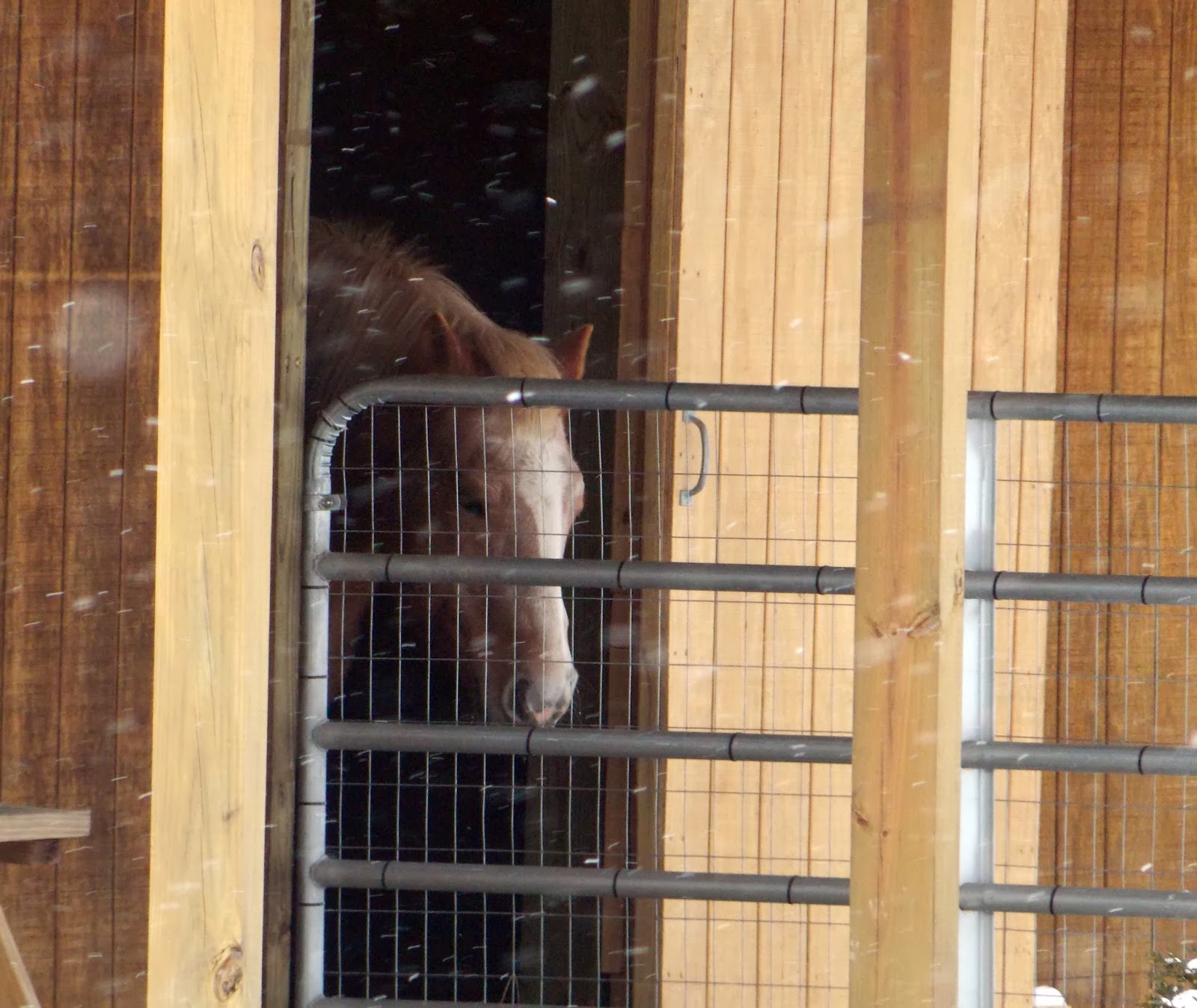 Can't even believe Mom had questions regarding my brilliance can you?  Have to say you're pretty smart too Mom, since you chose to remain sheltered in your house while taking this pic of me napping in mine :)

Camryn here:
Promise had surgery yesterday.  She'd had a cyst for many years, it'd come, it'd go.  Old Vet felt it was nothing, it didn't interfere with Promise way of going or anything.  It never gotted bigger than a chicken egg.  Ivy has always had a tendancy to grab Promise in that area and was probably the cause of it, then of course she was also the cause of it dissapearing as she'd pop it.
Suddenly in the coarse of maybe 2 weeks if that, the cyst became the size of a humans fist.  Mom tooked Promise into the new Vet.  He asperated it, not only did he not like what came out, but he discovered the reason it "appeared" so much bigger.  A huge mass had grown in underneath it.  He checked the asperated fluids and found no for sure cancer, but still it was suspisious stuff.  So they scheduled surgery to remove it all, plus while Promise was sleeping since she's not gonna be a Momma no more they was gonna spay her too.
Yesterday was her surgery, while on the table Vet also found a mammory tumor so called Mom for permissions to take that too.  Poor Promise had three surgeries in one day!!!  She came thru fine and is being a very good patient... 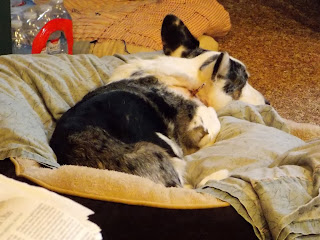 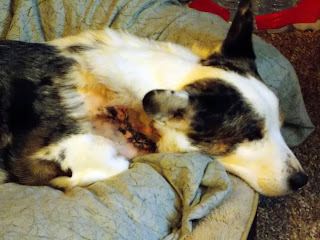 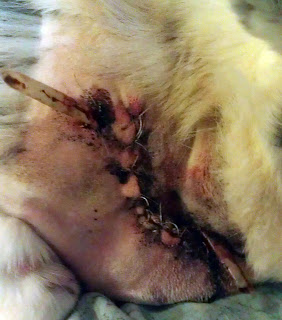 Up close, she's got drain tubes.  When Mom went to get her she was like "and how do I pick her up to put her in the truck".  Seeing as Promise has three surgical sites it was gonna be rough for sure.  She's got some strong pain meds, gets warm compresses several times a day.  And Mom's been spending lots of time in the laundry room loving on her.
And now we wait... 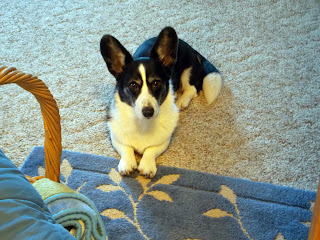 Ivy waits outside the laundry hospital room for a glimpse of her best bud.  We wait for the pathology reports to come back praying that the masses are benign.  Adding some of your prayers for dear sweet Promise would be much appreciated.
A little back story on Promise:  On Chris first deployment to Iraq, he arranged for Mom to have a special Christmas present.  That present was our Promise.  Her full name is CH Pecan Valley EvryStarEvryStripe, her call name Promise is cause Chris "promised" to come home safe.  Promise is sweeter than sugar, never gets in trouble (unlike Ivy) she's always been a quiet girl even as a pupster.  She's not overly fond of fast moving kids, though she adores Lincoln.  She was the awesomest of Momma's too.  While she's not Ivy's Momma she might as well be.  Promise had pupsters the day after Ivy's litter was born to Mirage.  Mirage got tired of the whole pupster thing after three weeks and gave her pups to Promise to finish raising.  While Promise was a bit surprised having started with 5 pups and ending up with 9, she didn't hesitate and took them all under her paw.
Later
Posted by Camryn at 7:01 AM 8 comments:

Camryn here:
Sorry it's been so long since I've posted.  We've had lots goin on round here, some good, some bad.  Guess I'll start with the bad and get it done though it's hard to write about. 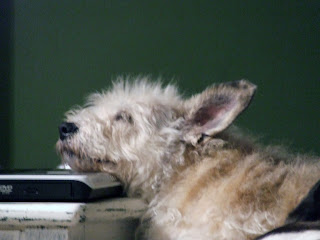 Our Tye crossed over to the Rainbow Bridge last month, it wasn't totally unexpected being he was gonna be 17 in Feb.  But, still we wasn't ready to let him go.  Mostly all him did was sleep & he had dementia accompanied by "sundowners".  The sundowner part of the dementia meant he'd be up n pacing all night.  Being mainly blind n mostly deaf this meant midnight tumbles down stairs!!!  No, he never gotted hurt but, we worried what would happen if Mom n Dad was working and him felled and did get hurt. Sooo, rather than let that happen, it was decided to let him pass over in a more gentle fashion.... 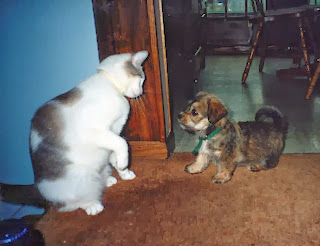 This was Tye as a wee pupster encountering their old cat Jigs.  Yep even as a pupster Tye was willing and ready to be the boss!!! 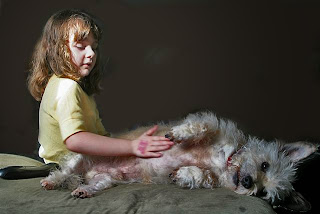 Tye LOVED, LOVED, LOVED kids.  He did get to meet Lincoln for a sniff test so that was good.
Tye was very special being a mix of many things, but mostly terrier (terror) and a little bit of butthead mixed in.   He was Chris dog mostly, and if you've even seen those commercials that make you cry when a dog greets hims soldier coming home, you shoulda seen Tye when Chris comed home.  He outdid all those greetings in a big way.  Tye was small but, did everything in such a big way.  While being Chris's growing up dog, when Chris did come home Tye stayed with Mom n Dad.  Tye loved everbody but, always knew and understood who his boy was.
Christmas is gonna be hard this year, Tye always unwrapped all his own presents then went to make sure he got to help unwrap everbody elses too.
R.I.P. Tye guy 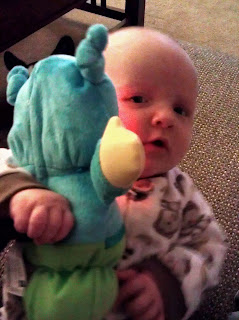 Now the good, Grandfoal is growing sooooo fast!!!  Lincoln will be three months soon and is already in six months clothes.  I've met him several times now though he's yet to meet me cause he's always sleeping when in the barn.  Lincolns Mom started a new job which has her out of state with training a bit.  This is good for Mom (specially missing Tye) cause with Chris working AND in college, Lincoln comes here lots n lots.  Another reason for less computer time!!! 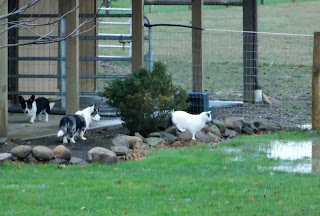 Some funny stuff, we got lotsa rain at Thanksgiving time.  Ivy and Promise are trying to figure Maizee out and what she's wanting to do. 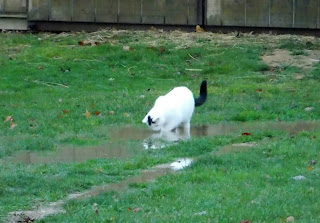 Mom calls Maizee "crazy Maizee" now cause her runs around splashing and chasing the puddles all about!!!  This went on for an hour even though it was very cold out!  She's a real hoot! 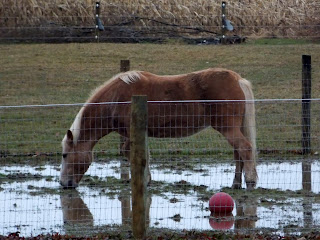 Since it be my blog, had to include me!  My paddock got a bit sloppy from the rains.  Not near as bad as the floods at the old place thankfully, it drains better and my barn n patio stays nice n dry.  Still I prefer to be out even when I can go in.  Bummer that I'm off my pasture for the winter so's it doesn't get all destroyed and the grass will be good come springtime.  Ooooh, springtime how I miss you!
I'll try to post more often, probably not as much as before on account of Mr. Lincoln n all.
Later
Posted by Camryn at 2:09 PM 9 comments: