Camryn here:
So Mom n Me be out putzin round my field as usual. It's not to hot for once and real nice breeze too. Cause of the breeze the flies didn't bother us, we was both enjoying ourselves. Coarse Mom hadn't asked for a trot yet either HA!
We notice two neighbors couple fields over pulling a wagon along their far fence line. No biggy, we just watch for a few and continue on. We notice them coming closer. Then suddenly they disappear!  We both are confused. Then I see em, they be hiding behind a tree now just one field over watching.  I of course am concerned about this and feel the need to watch them closely. Mom is like WTF.
These peoples had four horses last year, they all disappeared over winter with only two of them coming back in May. Now those horses are gone again. Anyway my point is they know horses, which is why Mom is WTF. Why play all hides seek watching?  They know I can see them and would worry bout it right?  Why don't they just wave n yell Hello the way normal people do? 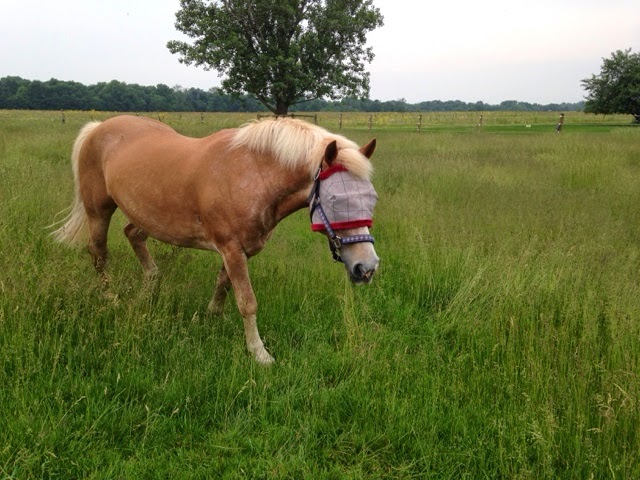 Camryn here:
One of the many things that Mom has been busy with has been creating a zoo for my Grandfoal. Not sure who likes it best though, Dad or Lincoln. It's a full wall mural. There are several birds, one walks along Lincoln's crip rail. There's a turtle, giraffe, elephant, tiger and a monkey swinging over Lincoln's crib. Both Grampa n Lincoln likes the monkey best. Lincoln laughs at it soon as he goes in his room. 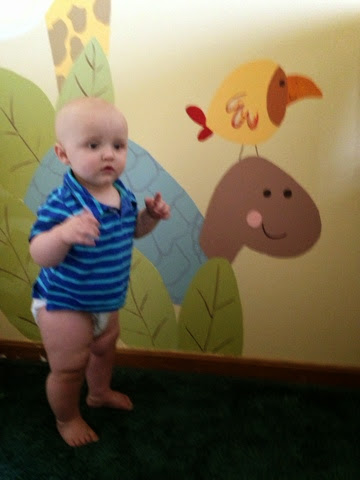 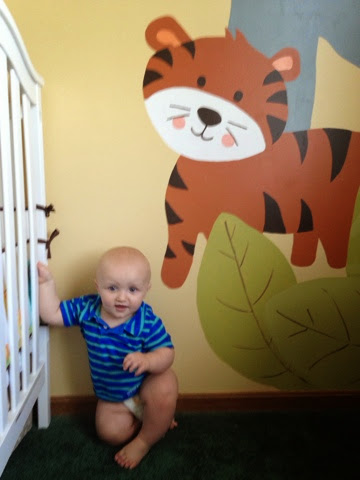 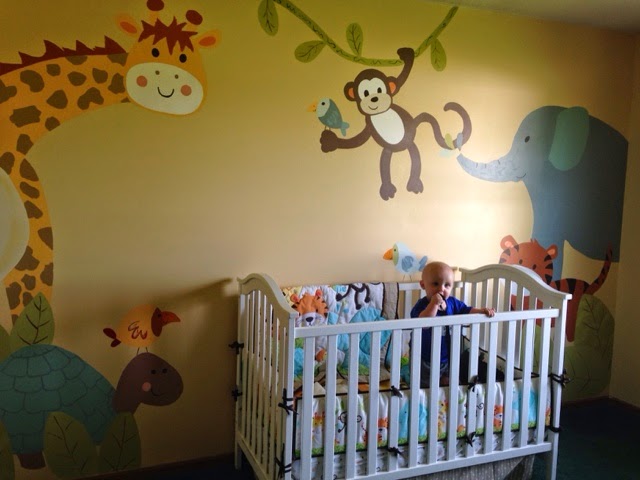 Camryn here:
So, me n Mom have been puttzin round my field. She's teaching me bout neck reining, I'm doing really good. Much better than I have in the past. I'm awesome bout turning to leg pressure now. And mostly I'll whoa to just Mom giving a big sigh and planting her bottom a bit.
We gots one big problem. Mom has unlearned how to not be a sack of potatoes when I trot!  Needless to say I'm not being to keen to trot now either. She's gonna shorten the stirrups and I sure hope that helps. Boy do I hope it helps! 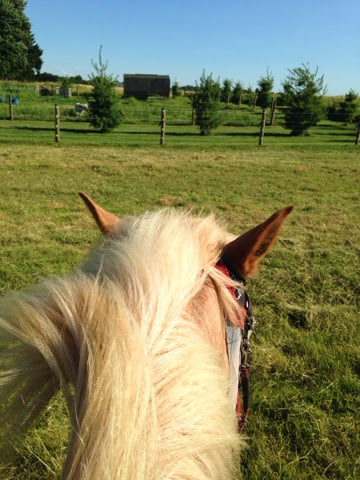 Camryn here:
Grandfoal Lincoln still sub par but, be feeling much better.  Some kinda virus knocked him for a loop.  He either coudn't keep his food down (Mom wore lots of this), or it came out the other end to fast, he was kinda colicky too.  The timeing was bad, they knew he wasn't quite himself but...
With Adam n Ashley arrival for a visit from Alaska which of course meant a partee, by the time he got real bad Grandfoal was at our horse, and the party aka pig roast was in full swing.  Being drinks was involved, his Mum and Dad weren't in driving condition.   Lucky that Lincoln was at our house & Mom knows the ins n outs of sick babyees.  So he was well taken care off, and Mom kept him hydrated best she could till morning.  Some kind of virus, while he was on the verge of needing hydrated the Docs felt safe to just give him anti nausea stuff and monitor after a bottle to make sure he kept it in his tummy.  So he didn't need to stay there or anything.  While he's not 100% he was well enough to help Mom n my trimmer do my feets this morning.  Wel,l he didn't help just supervised with a running line of baby chatter.  The neighbors also comed home and presented Lincoln with a Yogi Bear present to thank Mom for wrangling the Donks.  The Donks who now adore Mom, stead of running as she passses thier field with my wheelbarrow of compost, they now walk single file on their side of the fence following along.  To funny!
Mom included some Grandfoal pix from the day he had his first ride upon the trustiest steed in the land "ME"...
﻿ 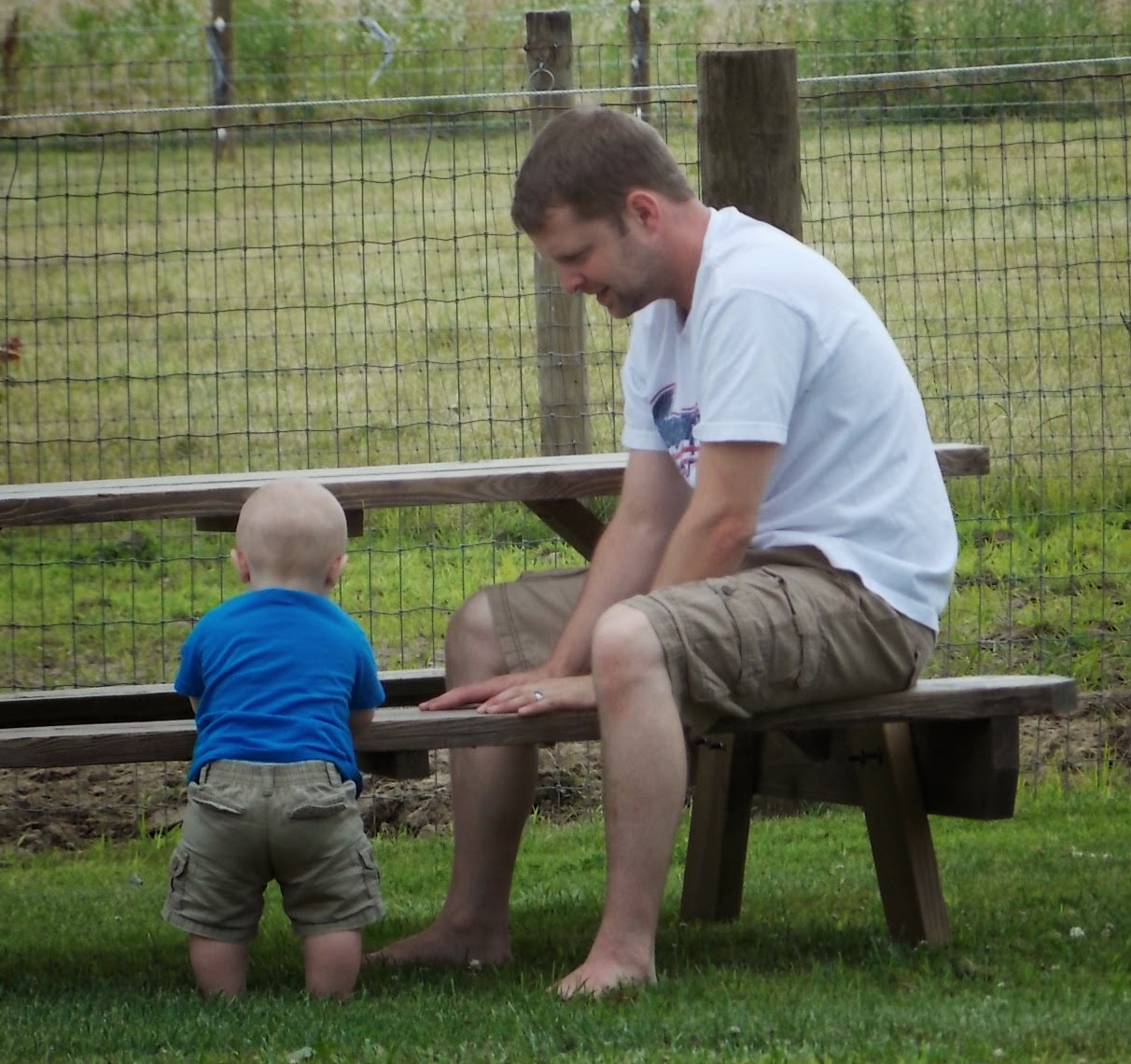 Lincoln discussing plans for the day with his Daddy... 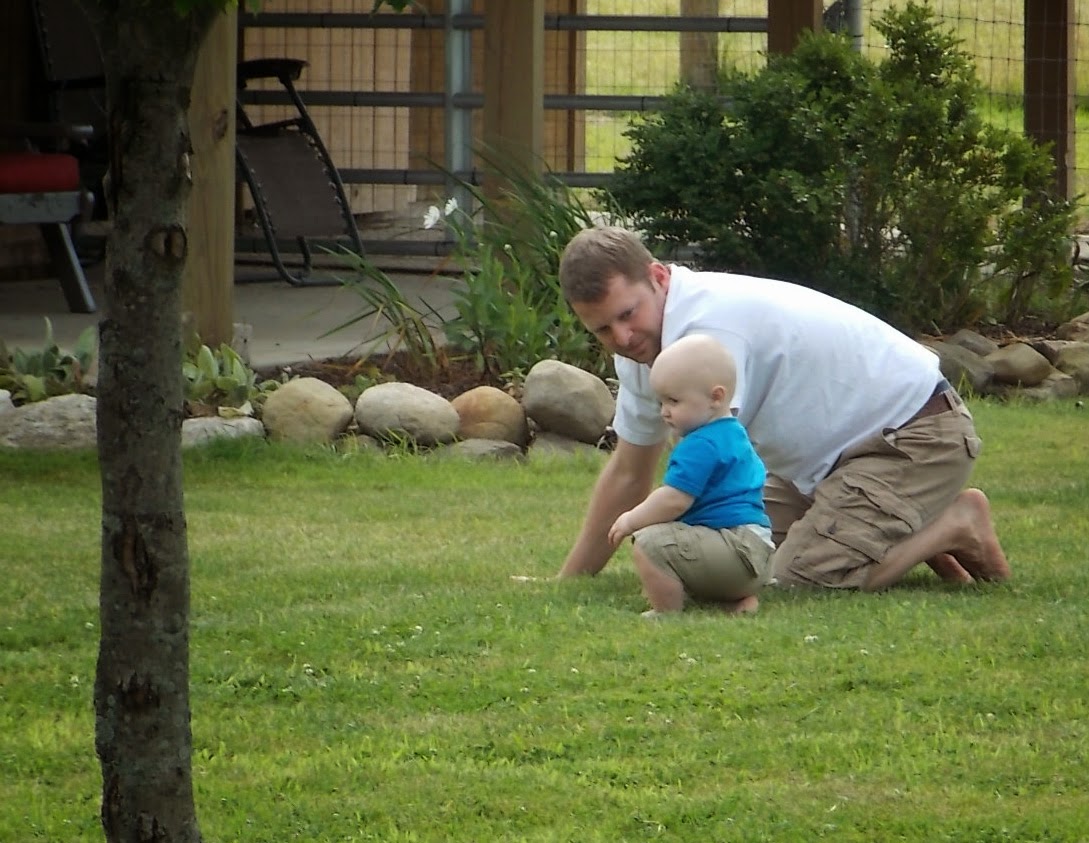 Lincoln: K, now Dad you're gonna give me a head start right?
Dad: "you got it lil buddy" 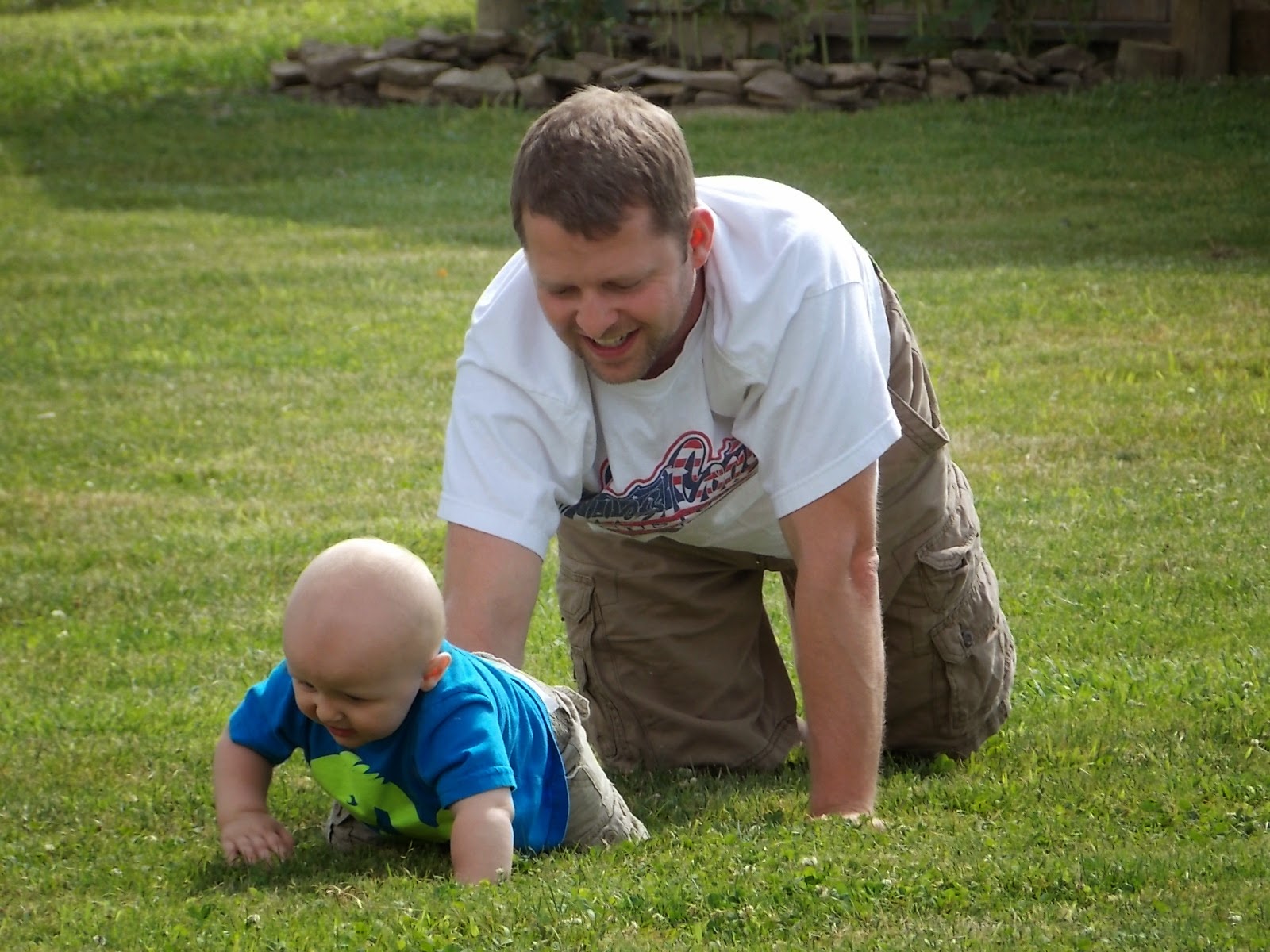 Lincoln wins!!!  Oh, he tooked his first steps two days later to boot!!!  I take credit as he had the confidence to try just days after our ride! 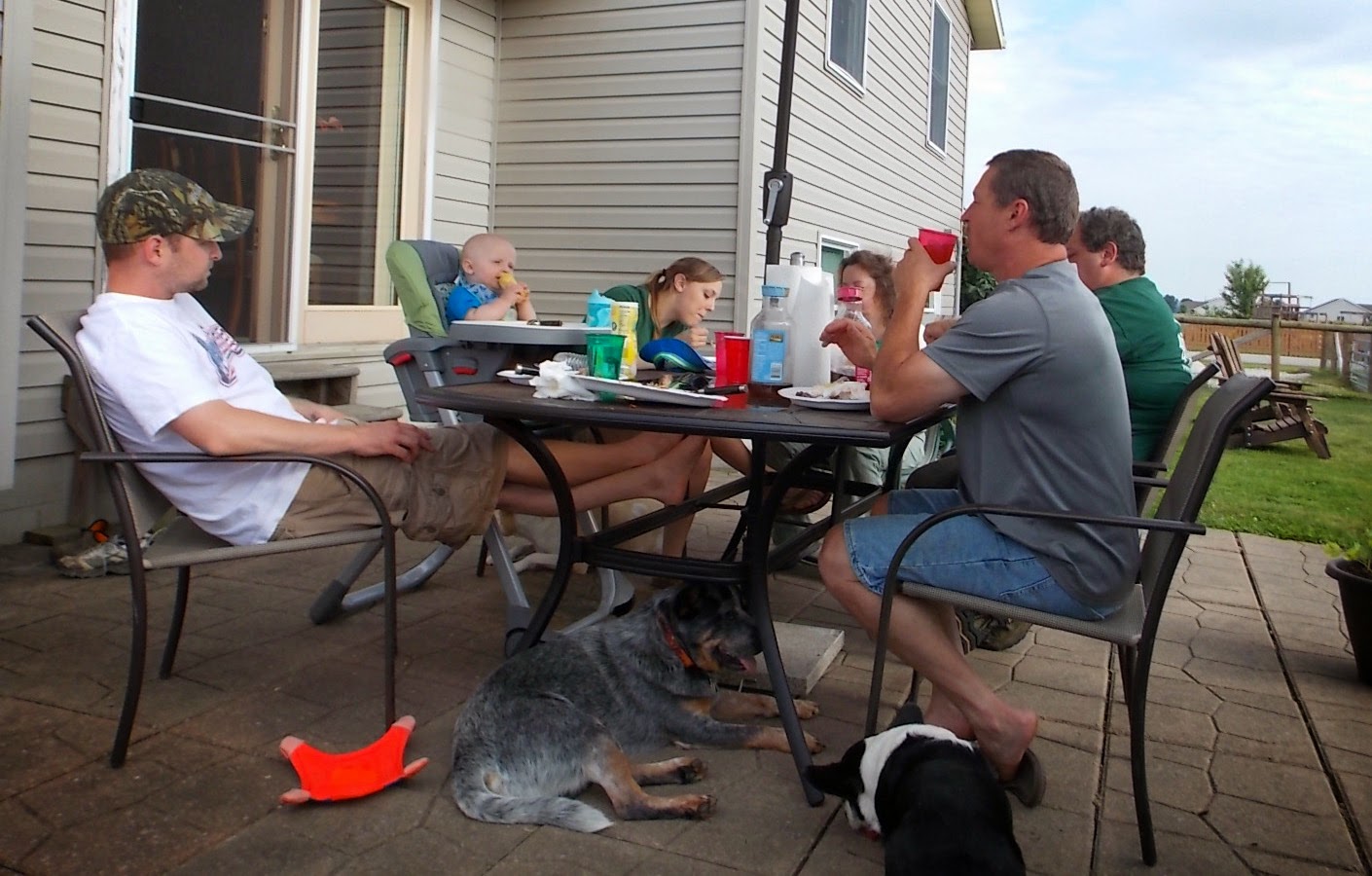 Every body taking bout what a specail day it was after Lincoln's ride.
Lincon is hoping for another ride next week.  Someday he'll be big and balanced enough to not ned sidewalkers. Otherwised he'd be riding me nearly every day!
Later
﻿

Camryn here:
Bit of excitement this morning. Mom was letting the dogs in from the yard and noticed I had some company. Dexter, Ruby along with they're young son Diezel came to visit. While we had a lovely chat over my fence, Mom was ruining it all by calling the neighbor.
They're off camping and their teenage son was takin care of the critters.
He's not much of a gate closer apparently!
Mom grabbed some feed in a can and headed out. When they saw her coming they headed off to the other side. Did I mention that their Donks aren't particularly friendly?  Dexter just recently gelded (another story) is a mean S.O.B.  Little Diezel who is friendly wanted to come see Mom real bad.  His Momma kept blocking him from running to her though. Mom did some natural horsemen approach/retreat, added some shake the can of feed stuff. They slowly began following her bit by bit. Once close to the gate Mom thought to check if their hay room door was unlocked. Jackpot, it was.  She grabbed a flake and let them watch her lay it out and sprinkle feed about. In they went. Ruby and lil Diezel even came up for ear rubs to thank her too.
The teenage non gate closer drove in moments later, he thanked Mom for keeping him from getting killed!  He couldn't believe Mom got them all in so quick. Guess it takes them hours and Mom had it done in less than 20 minutes. 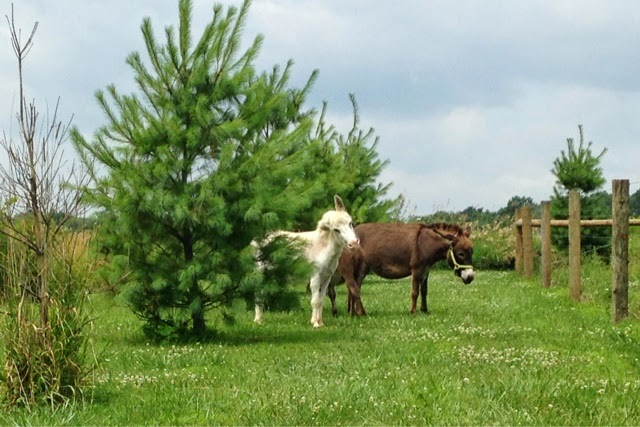 You can't see Diezel here Ruby is blocking h from coming to Mom. Dexter is shaking his head and snaking his neck out warning Mom.
Glad we had something cool to post about. Oh, and neighbor said she's gonna buy Mom the biggest Yogi bear that Jellystone has. Lincoln is soooo going to love that. He's sick and at the horespital right now. Gonna be OK and yet another story.
Later
Posted by Camryn at 9:43 AM 1 comment:

Camryn here:
SIGH been absent of late.  All is well excepting shortly after our last post, our Promise headed over the rainbow bridge.  We don't know what/how it happened, that night she was fine, in the morning her rear end wasn't working SIGH.  Of course it was off to the Vet, Mom was waiting in the parking lot when they arrived at the clinic.  Mom n Vet staff tried what they could to give her time to hopefully recuperate.  Vet did not recommend surgery, said it was pretty brutal and he'd not subject his own dog to it.  He felt Promise was in pain, after thinking and talking lots, it was decided to let Promise go run over the bridge.  Still I hear Mom calling Promise to come in with Ivy & Theo from the yard.  SIGH, so that the main reason we've been quiet. 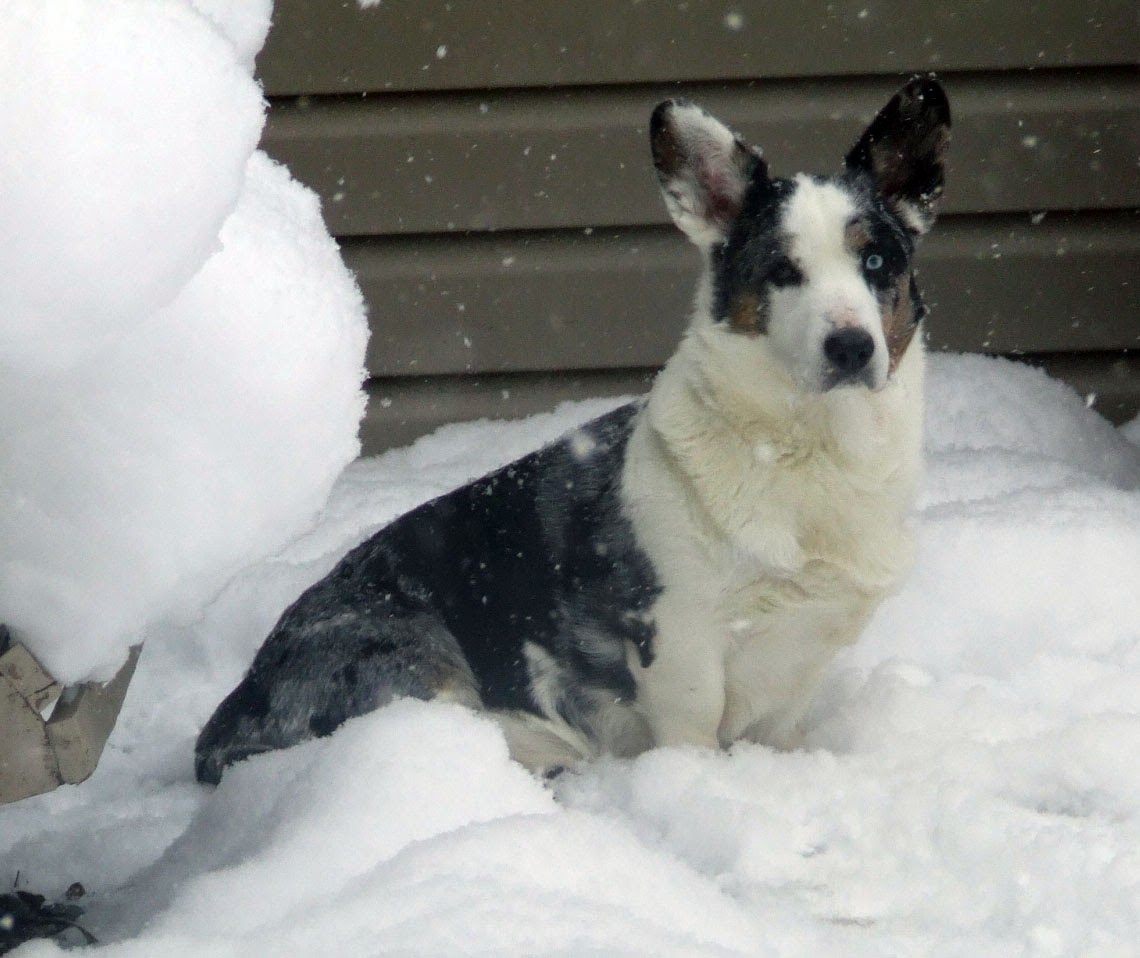 R.I.P dear CH Pecan Valley EvryStarEvryStipe aka Promise
If you recall Promise name is cause she was a gift from Chris to Mom while he served his first tour in Iraq.  He promised Mom to come home safe, hence the name Promise.

Ok, good stuff as I grab a tissue.  As you can see from my new header Grandfoal Lincoln is just GRAND.  Yup, I just had the honor of being his mighty steed for his firstest ride ever.  Oh, what fun I gave him.  Bummer, though that Dad didn't grab his glasses so most pix he tooked was of the sky!!!  Guess it's a good thing it won't be his lastest ride right!!!  Mom got him his very own helmet and he's been practicing wearing it.  It fits his noggin but, the straps be long for him.  Mom figures since he'll have side walkers that the strap part doesn't matter much, just the fact that he's starting a good habit like wearing a helmet from the get go is what matters.  Funny though, while he had a helmet he was bare footed, since I am too we matched.  Lincoln is such a chubster he's got no ankles so proper boots will have to wait.  And guess what two days after his ride, he walked all by himself for the first time.  I imagine his rid helped lots with that ;) 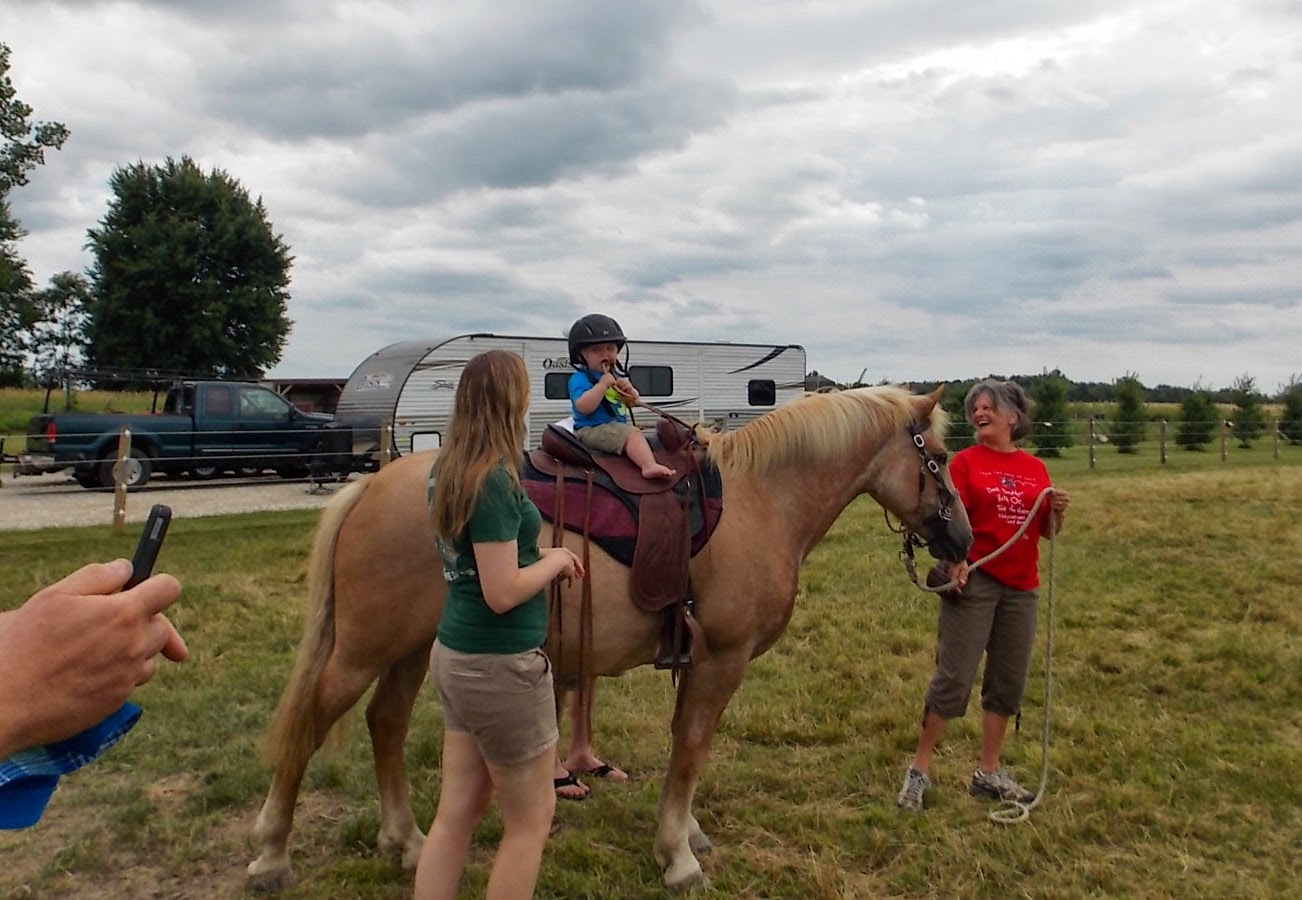 Mom's laughing cause Lincoln had my over/under and was flinging it round.  That's Sam Lincoln's Momma standing back for the picture, you can see Chris feets on the other side.  The hand with the iphone is Lincoln's Oma taking video.  She lives long ways from here and never gets to see any of Lincoln's firsts.  So, I held off giving him is first ride so that his Oma n Opa could be a part of what I consider the biggest first in any foals life.
So, I'll try not to be so tardy with posts.  Don't expect a whole lot right away though.  Mom's youngest Adam and his honey are flying in from Alaska tonight for a visit.  Gonna be happily busy.
Later