You're probably thinking from the subject line that this post is in regards to "A Promise" of some sorts.

Well, in a way it is.  During Christopher's (eldest son) first tour of Iraq, he was missing Christmas with us.  Shoot writing this tears me all up!  To help Mom thru missing him, he arranged the most wonderful gift (being home of course would've topped it).

It was arranged thru the breeder of one of my other Cardigans that we'd be adding to the Cardi Crew here.   Promise is named because of Christopher's promise to come home safely.  Her registered name is "Ch. Pecan Valley EvryStarEvryStripe.  I'm sure you can pick up on the military significance there.
﻿
﻿Promise is the absolute sweetest animal you'd ever meet.  Very soft, and gentle, even as a pup, perhaps she understood she was theraputic for me during a difficult time.
Posted by Camryn at 2:06 PM 4 comments:

Took some pix of Camryn's immediate neighbors the other day.  I think without them nearby being an only horse would be much more difficult for her.  They holler for her pretty often, normally she just ignores their calls.  She does nap frequently within site of them however, so I know their presence is a comfort to her.  Another neighbors property is between Camryn and these guys, it's only 90 ft across so their close though not touching close. 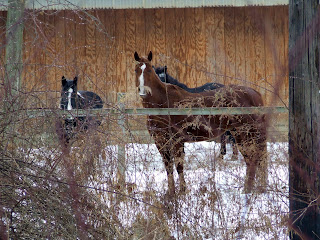 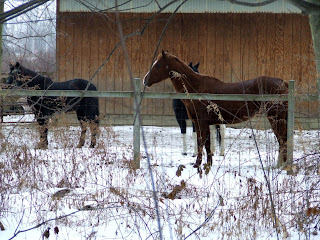 Rudy (nearest) is an Appendix Quarter horse, he's 15 and a new arrival at Danette's.  At his old barn, he was kept blanket by the barn owners.  Turns out this wasn't done to keep him warm as much as to hide that they'd reduced his feed!!!  Danette will get him back in weight in no time.
Dakota (black/white blaze/stockings) is an 18 year old Spotted Saddle Horse and Danette's personal horse.  The addition of Rudy has thrown her back into season!  Danette calls her a hussy as anytime a handsome boy is around she "wants some of that!"
Eclipse (black) is a 20 something Arabian.  You'd never know he's elderly when out riding with him. Camryn is a enchanted with him :).   She frets a bit when riding in the arena if he disappears outside.
Posted by Camryn at 1:10 PM 1 comment:

Hafy Gurl is a Birthday Gurl...

Today, my Gurly gurl Camryn turned 9 years old. Carrots w/breakfast and dinner tonight, a new stall ballz has been hung in celebration.  And of course extra huggins for her as well.  To cold for a proper party & pix.  Maybe we'll do Disney World for her 10th LOL just kidding on that one!!!  The sun is out & right now she's in her paddock sound asleep.  My sleeping Haflinger is a wonderful view from the window.
Posted by Camryn at 11:25 AM 3 comments:

I can't believe it, Camryn & I have been together an entire year as of today.  Seems like yesterday that we went to pick her up.  Have to say, I haven't regretted it one iota, I hope Camryn feels the same.  I am so looking forward to many more years with Camryn.  This year with her has been so good, I almost  imagine the team we'll become as more time together passes.
I also wanted to document here Camryn's diet/exercise results in pictures.  I can see it big time in person, not so sure it shows in pix...
﻿
﻿
﻿

﻿﻿
Camryn had an episode of colic shortly after I got her.  Vet felt it was caused mainly from an enormous worm load & compounded by the change in local/feed.  When Dr. Connie arrived, at first sight she wasn't sure if Camryn was actually colicing or in labor!!!  Yeah, she was actually that obese!!!  Well, guess I'd better hit the treadmill now LOL
Posted by Camryn at 6:31 AM 3 comments:

PS. Camryn's stall ballz is a hit.  Judging by the side of her face, though she wears it well!!!
Posted by Camryn at 10:54 AM No comments:

Well, sort of LOL. She is a ballsy mare though!  With Camryn's 9th Birthday coming up on the 22nd, I decided to try a little experiment.  I made her some sweet feed balls to hang in the barn & in her stall.  She's a beaver when bored, hoping these may help with that, plus perhaps she'll be more eager to stand in the barn when the weather is really bad.  The human in me wants that of course.  Cam will be getting them before her birthday as once I had all the ingredients together I just had to try.  I made two, and took pix of them cooling in the snow.  Hope the birds/squirrels don't discover them.  I'll let you know how she likes them & if I destroyed a good cooking pot making them!!!
If they turn out, I'll try to find a few small angel food cake pans.  All Walmart had were expensive bundt cake pans.  I don't think Camryn would much care if they have pretty shapes myself...
Wonder if the Hubs will mind that I cooked for the horse & not him LOL
Posted by Camryn at 11:55 AM 2 comments:

Hubby & I decided our down comforter had seen better days.  So off we went shopping, to replace it. Rather than tossing the old one, it's only problem being after many years of use & cleaning, the down had rearranged itself to only the bottom.  I decided to give it to Onyx
I felt it would be perfect for his house in the barn.  As I carried it down to the barn, Camryn saw me coming and began heading for the gate to greet me.  Suddenly, her head popped off, she did a few shot gun snorts and took off across her paddock.  Actually doing the prettiest high stepping trot I've ever seen her do!
Normally Camryn is not a fearful girl, I realized with the white snow surrounding me, along with the bulky white comforter, what she saw was a head & boots heading her way!!!  I'd have freaked out myself at that one.  I commented to her regarding how pretty she was moving, she stopped frozen, with a "what the" look on her face.  I could here her thinking "it speaks & has Mom's voice"!!!  Once I entered her paddock, I simply tossed the comforter over the gate, continuing on to her hay bag as if nothing out of the usual was happening.  Camryn came back to her normal self, immediately headed for the comforter, giving it a good sniff.  She then turned and looked at me with a "boy do I feel silly now" look LOL.  I did click/treat her several times as she examined it further, so she likes comforters now :)
Onyx thinks the comforter is killer in an entirely different way.  As soon as I arranged it in his house, he crawled up over it and plumped down quite happily.  He thinks he's in a 5 star barn now I'm sure.
Posted by Camryn at 3:20 PM 1 comment:

Posted by Camryn at 2:03 PM No comments:

With permission of photo owner I did this pencil drawing...
﻿ ﻿ Feel free to critique, I haven't drawn in awhile, and never with such detail.  These golden beauties are very inspirational!!! I already have another in the works, gotta do something in the winter. Plan to send copy to photo owner, keep one for myself, & hopefully sell original once I get it matted.  It's 11 x 8 in size, done in pencil signed in ink.  Any takers ;0)   Haven't set a price just yet, or how where to sell.  I've sold paintings of my Cardigans on EBay so perhaps that route.  Any thoughts on that?
Posted by Camryn at 12:55 PM 6 comments:

Do dogs have nine lives???

You may recall my sons Pit bull Remi having surgery this past fall for eating corn cob?  Well, today Remi decided to see what it feels like to be "under" a truck!!!  Not sure who I feel worse for, my son Chris who was backing the truck, or Remi who for some reason known only to him decided to dash behind it!!!  Once loaded in the back of the car to head to the Vet with Samantha tending to him (Chris driving).  Remi felt the need to be in the front seat.  At the Vets he was his usual enthusiastic self, so while they felt he was fine, the kids left him there to be checked over.  Vet called to confirm the only thing injured was Remi's ego and that wasn't even hurting over much. The Vet & staff adore the big ol goober, he's allowed free reign of the office when he's there.
Chris thinks his other Pit "Emily" who feels Remi is a very annoying brother may have dared Remi just to see if she could be rid of him!!!
So glad Remi is OK, & Chris learned a VERY important lesson, never depend on the dogs being out of the way.  Very happy, this was learned prior to my having two legged grand kids.  I dropped off a copy of "Marley & Me" just last evening, thought Remi and the kids were much like the couple and Marley in the story.  Marely is worse but, not by much...