Decided to give blogger one more try, lo & behold it’s working!
I’ll start again with the most recent happenings then, perhaps backtrack. 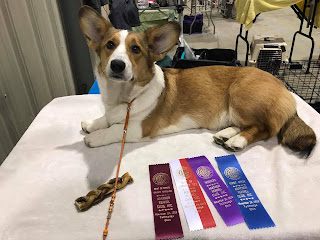 After Ivy’s passing this past spring, Hubs & I felt that we’d now just be a one dog household with Theo our ACD. Not long after this decision, we both realized we “needed” a Cardigan in our lives. We’ve not been without for like 20 years!  Having been in the breed that long, I had contacts & put some feelers out. Being not so popular a breed, there can be quite the wait list. An old friend happened to have a litter, non were available but, being an old friend one became available. I knew I wanted a female, Theo being male though neutered, the dynamics would just be simpler.  I was soon driving 8 hours to meet our pup. I had two bitches to choose from, one a show prospect, the other a pet puppy.
We’d all looked at their pictures, Grandsons included & agreed if breeder felt pet puppy would be a better fit, we’d go for her. I mean, I hadn’t shown in ten years & had no intention to start, right!?
Well, both pups had amazing temperaments, as did Mommy & having known the sires father, knew he most likely did as well. I decided to go with the pet, her litter name was already Tessa, we all loved it so it stuck. Litter theme was the Beach Boys, I’m country so, little knowledge led me to google, her sire is Beach Cruiser so, Little Deuce Coupe became her registered name. 🤷🏻‍♀️
Tessa fit right in, Theo found her need to herd & boss annoying but, adored having someone who played with him. Lincoln at 5 & our official animal whisperer was over the moon, Jefferson at 3, was aghast at this ankle biter chasing him about literally biting his ankles. Cowboy boots, or apple bitter on his legs solved that & he began enjoying her as well.
After a few weeks of watching her, I began to realize she might be something special. Lincoln told the breeder, “she’s perfect, you should’ve kept her!”  Lincoln, knowing I’d shown in the past & having a big love for pretty ribbons, kept begging me to show her. I finally asked Hubs if he minded, he knew a good Cardi by now & was on board. Called breeder & got permission.
Long story, shortened a wee bit, she’s competed in three shows & won the bitch points each time! Pictured above with blue 1st in 6 to 9 months ribbon, purple Winners Bitch (WB)  ribbon, red/white
Best of Opposite Sex (BOS) ribbon & maroon Best Owner Handled (BOH) ribbon!  She’d beat two Champion bitches (not a dirty word in dog show land) for the BOS. What had been 2 points towards her Championship, became a 3 point major!
BOH is something newish to AKC, it’s meant to encourage owners who show to continue competing once their dog has finished their Championship. Now, besides the normal groups of Best of Breed), some shows include groups for BOH. Anyhow, with us both needing practice, I decided to stay for BOH groups for that reason only.
Into the ring we go, myself & puppy Tessa out playing with the big already Champion herding breeds. I had her fave ringside toy & was determined to make it fun for her. Just after three shows, Tessa was getting the hang of what’s expected & becoming more confident. We did our thang for the judge then stood in the lineup for the judges choices. We were practicing & just having fun with no expectations. Can you see where this is going yet? 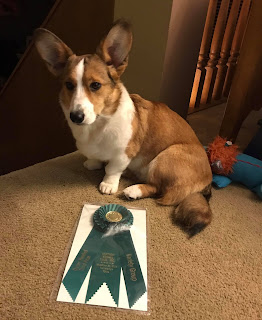 Yep, the judge pointed to Tessa for a Group 3!!!
She was the only puppy, the only non CH in the ring!  The other winners were actually more excited for her than their own wins. While it’s not unheard of, it’s not common at all. Actually, in my past 10 years of showing, this was only my 3rd time in the Group ring & my only placement!  Can you say “Cloud 9!”  She’s been shown three times, thus far undefeated in the classes (non Champion competition) with 7 points towards her Championship!  Her breeder is calling this her “Wonder Litter) as one brother already has not just his Championship but, his GrandChampionship as well at just 7 months!
I’m so glad I listened to Lincoln in deciding to show her. This lil girl is going to be a blast to show!

Blogger & I have been arguing for quite some time. First it wouldn’t allow me to go back & edit without disappearing. Then it wouldn’t let me even comment on others blog posts. I’ve worked thru those issues at last. But, now I can’t upload pics. What’s a blog with no pics?  So until I figure that out...
The boys are growing like weeds. Well, Lincoln is, Jefferson not so much...

We’ve got plans to go visit Kennedy & my daughter this fall after “hopefully” typhoon season has ended in Okinawa. Plan to do a bucket list item & arrange a beach ride while we’re there!  Kennedy has been taking lead line lessons so, perhaps she can join Gramma!?

The minions are doing well, we’ve been horribly wet here, every time I plan to get the cart out it of course rains. Not complaining however, considering the flooding in some areas and all!  I’ve finally found a halter that doesn’t allow Pippin to get his grazing muzzle off, hope I didn’t just jinx myself!  He’s still a bit chubby but, on the way to losing. Merlin is out of shape but, reasonable in weight. They’d come off last summer resembling engorged ticks!

Sadly a little over a year after having been diagnosed with canine Cushings, then a thyroid issue as well, we let had to aid sweet Ivy In her voyage over the rainbow bridge in early April. She was ready, fortunately we didn’t over wait. She told us, we listened.   She was our firstborn homebred & we thought our last Cardigan Welsh Corgi.
Emily the boys Pitty suddenly began seizing,  Vet felt the sudden onset along with severity, she most likely had brain tumor. Sadly, we had to assist her over the bridge in January. February brought the loss of Hippo, almost a year to the day of adopting him & partner Tiger. For guinea pigs they were elderly so, not a huge surprise there. Rough start for 2019.

Turns out we aren’t just missing Ivy but, stubby legged, big eared personalities as well.  We’ve had a or multiple Cardis over 20 years  Another wee girl will be joining us this weekend from a reputable breeder friend. The boys are over the moon with excitement, they know what’s mine is theirs. So, technically “Tessa” will be their new puppy as well. Theo I’m hoping will enjoy having a new lil sis as well. He won’t know what hit him I imagine!

Fingers crossed I get this picture thing figured out!
Posted by Camryn at 2:16 PM 3 comments:

Been crazy busy, happens quite a lot around here.
Ivy our Cardigan Welsh Corgi began drinking tons of water & of course what goes in must come out. So, lots of potty cleanups there. I noticed suddenly, her abdomen was distended as well. So worrisome, knew it was most likely one of three things, luckily it turned out she has Cushings. Yes, dogs get it too, just different symptoms. I say luckily, as top worry was Congestive Heat Failure!  Lots and lots of testing but, meds are kicking in and helping her. 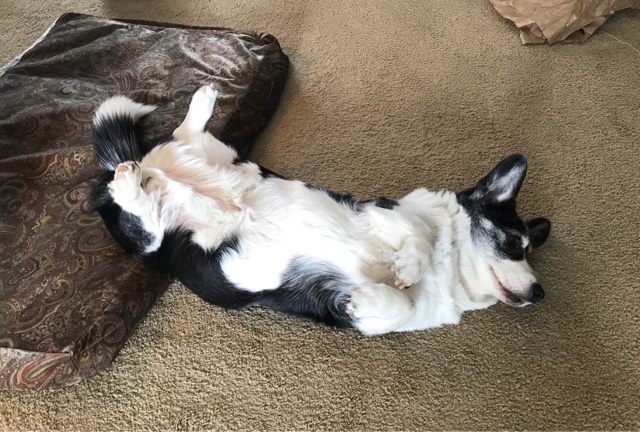 Theo however got to thinking, "if she can pee inside, I can too!"  NOT!  Ivy's accidents were due to illness & understandable. Plus, the amount of water she was drinking, her urine was nearly water. Theo being a male, didn't just cop a squat, he was pissing ON everything!  Our brand new furniture, antiques...and his pee reeked!  Couldn't help but to think of Nuz Muzz as I was constantly scrubbing urine. Went thru gallons of Natures Miracle too. Well, Ivy is doing feeling better AND Theo is wearing a belly band. Funny how he hasn't wet it!

Next up, a friends teenage daughter felt her guinea pigs needed more attention, with school, sports and a drivers license, the piggies weren't getting their loving. Any guess who has the piggies now. Yup, we do! Seriously, they're adorable, eat hay, pine bedding, things we've got plenty off anyway. Just need the veggies, in the summer we grow them anyway & attention. Surprised the boys, with them, Jefferson really likes them, though at two he has the attention span of a gnat. Lincoln LOVES them big time. He'll sit cuddling them & hand feeding them all day, he's such an animal lover! Comes by it honestly lol. 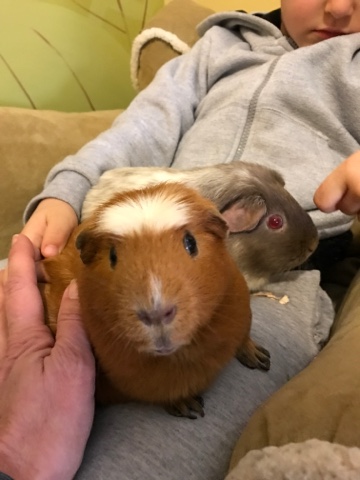 Tiger is the ginger, Hippo the roan   Came pre-named and neutered!

Wait, there's more, it appears we've added a third barn cat. I'd been seeing this particular cat since fall skulking about in the back fields. Late last week he showed up in our barn. Of course I fed him. My girls are none to happy about the moocher, I reminded them both, they'd once needed a soft spot to land. Margeaux is softening up, Maizee just wants him gone, the Minis could care less either way. I posted it on several lost & found Facebook pages. Turns out, it had been dumped at one of the nearby boarding barns. The BO, actually had an eye infection treated before it disappeared to come here. Guessing he didn't appreciate the Vet trip. Found out it's a boy & it took off before she could get him neutered (dang)!  The eye isn't 100%, he won't let me near yet, I'm feeding him, going about my business & he's getting more comfortablein my presence. Lincoln is happy that I'm feeding him, "Good Gramma, you treat him the way you'd want treated!"  Bless his little heart. The cat is a bobtail soooo, of course we've named him "Bob!"  I really need another Vet bill!!!  Again, NOT! 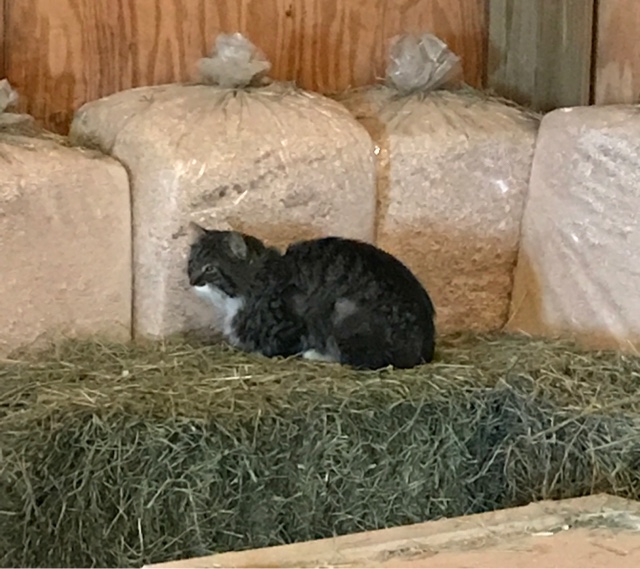 Making himself right at home!
Later
Posted by Camryn at 3:37 AM 10 comments:

odd weather for February, record temp of 71 degrees!  The boys & I took advantage & took what Lincoln calls a nature walk. We of course attracted an audience... 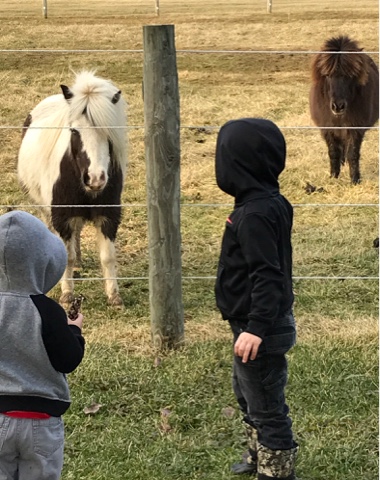 We headed for the back field, the boys now understood why they had their boots on... 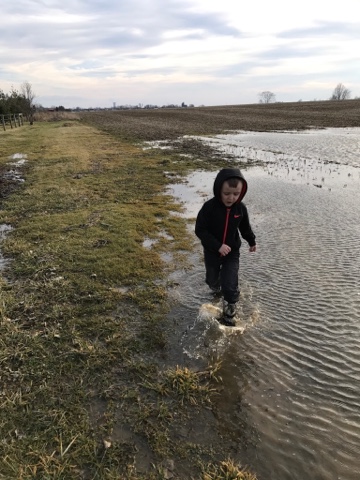 Poor Jefferson had one of his boots sucked off. Thankfully, I had a pair of pajamas to get him in something dry 👍🏻 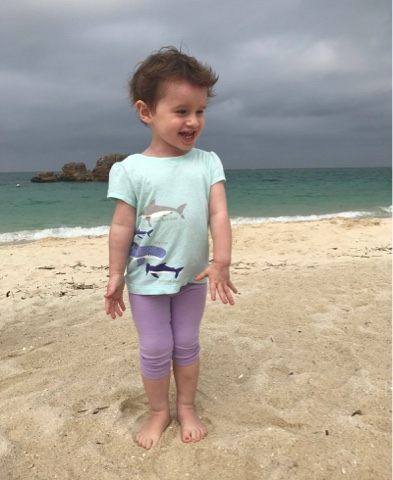 Can't leave sweet Kennedy out. While the cousins play in mud, she's beaching it!
Later
Posted by Camryn at 6:29 PM 2 comments:

one of these things is not like the other...
Hard to tell I know Especially as they all have the same waistline. Maizee must've had to "go" really bad to risk being in the stall with Pippin. He's been known to give chase just because!  Plus, the minions still have the occasional skirmish. Even a fat cat could be flattened easily. Luckily they both were hunkered down over feed bowls, Merlin had just noticed her. He'd have merely snorkeled her bum though.
Later