Camryn here:
Mom thinks she's done banging her head on the wall trying to figure out which saddle pad to get for me n my Barefoot Saddle.
It came with an older Grandeur pad.  It has a thin closed cell insert thing, with my wither atrophy I need differant type inserts.  Her's got a borrowed Equipedic which has thick open cell inserts.  But, not enough support to protect me from her "apple bottom"!!!
So her's been doing lotsa reading n stuff trying to figure out not just what pad would work best for me.  But, one that works for da pocket book as well.

Her choice would of course be this: 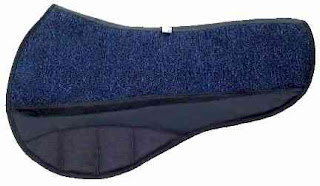 A Skito Dryback pad.  They can build it just for me but, the cost is very prohibative for buying.  Mom has always had issues with Champagne tastes with Beer wages Dad says hee hee.  Her agrees though.
So, a very good second choice is this one: 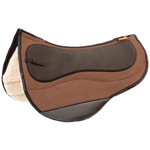 It's a Barefoot Western Physio Pad System.  It says it's for horse's with atrophy AND for riders with "Apple Bottoms".  It's not cheap either but, Fri. Mom will have enough to order it for me. 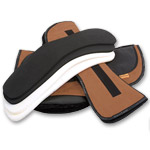 It has a whole system of inserts that will help give me spinal clearance and stuff needed for a treeless saddle.
Her's gonna call the store tomorrow that sells it to talk more about it.  Peoples have told her the store be very helpful and honest at guiding people for their horses needs.

So hopefully Mom won't have to be banging her head on walls n such no more!  Then her'll start saving up for the Columbus Equine Affaire Camryn Shopfest in April ;)
Later...﻿
Posted by Camryn at 4:41 PM