Camryn here:﻿
After I heard Mom call Promise, Ivy, n Tye in to the house late Monday night, I knew that meant Mom was heading to bed herself.  I waited bout half hour just in case, before making the voyage to Shy's party  (Adventures with Shyloh)  in Michigan.  Was a bit further than I'd thought but, it was worth it.  That girl knows how to throw a party, and so many boys!!! 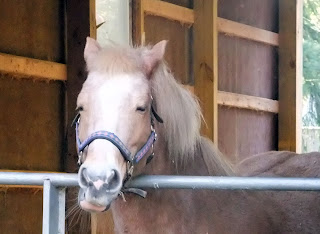 Had a blast, drinking (water) munching (hay) and dancing tons.  Had to leave sooner than I'd really wanted to though.  Made it home just before Mom came to give breakfast.  I did miscalulate in thinking I'd have all day to nap though.  Turned out my trimmer was coming, it was hard work holding feet up and sleeping at the same time.  Guess I can't party like I used to!  Soooooo sleepy, really needed the gate just to keep my head held up while I chewed & snoozed!
Thanks Shy for the invite and super fun time.
Later...
Posted by Camryn at 8:44 AM