Camryn here:
I'm afraid my blog has been at least temporarily hijacked by our Lincoln.  I don't mind as I'm not doing much of anything interesting AND since he is my Grandfoal, I'll share. 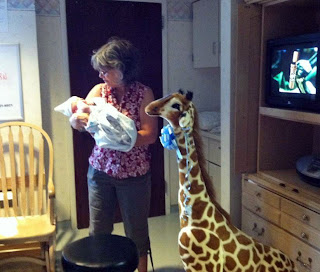 Yup that's Mom just going all goo goo over Lincoln.  But, the real story is the giraffe looking on.  See Dad is Chris StepDad, so at one point he mistakingly made mention to Mom that the baby would not make him a Grandpa.  I say mistakingly as Dad has put more of himself into Chris than Chris bio Dad.  Chris even told Mom if he's half the Dad that Dad has been to him, he knows he'll do an awesome job being Lincoln's Daddy.
Mom informed Dad that Grandfoal comes into the world as a blank slate, that in the world of Grandparenting it be totally up to him to determine what the relationship would be.  That she could only hope he'd realize this AND if he didn't that he'd darn well better pretend otherwise!!!  So, back to the Giraffe, Grandfoal's nursery has a Giraffe theme.  Once we'd been asked to go to the waiting room while Sam n Chris brought Grandfoal into the world, Dad went to the restroom.  He came back all excited asking if we'd seen the huge Giraffe in the gift shop there.  Then he turned all little kid asking Mom "can I buy it",  Mom said "it probly costs lots", Dad said "I know I already looked".  So Mom said yes he could buy it.  Off they went to the gift shop, Dad made the lady attach a the blue bow to his neck and carried it to the waiting room so pleased and excited that he had this treasure just for Grandoal.  Mom was just sooooo tickled that Dad is getting totally into "Grampa role".  Dad "now Grampa thru n thru" is also talking bout adding a crib in the new house!  Coarse while Mom has always loved n adored Dad, this has made her love him even more.
Chris bio Dad by the way showed up at the last minute bearing a box of cigars, saw the giraffe and his "I'm an important person" mode dropped but, just for a bit.  Mom had just made mention that he'd called three hours before that he was on the way (45 minute drive), so where was he before he finally showed up.  Sam's StepDad who was also there (her bio Dad wasn't) said to Mom "the important Grampa's are both here".  So very right he was/is.  Chris bio Dad onced we were being taken back to see the new family barged ahead of everyone, my Dad noticed this and dropped back, waited for Sam's Mom and escorted her to the front.  Mom n Dad's feelings are that having given birth to Lincoln's Mommy she deserved to be first in line.  Which is as it should be I feel having been a Mom myself on a few occasions. 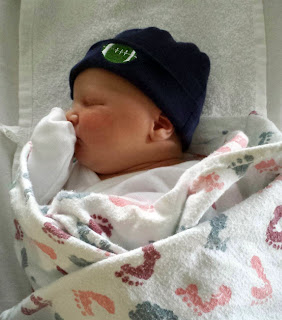 This is Lincoln on day two, since Mom now has Dad's cold she can't go see Lincoln.  So she called Chris saying she was having withdrawls, he texted this adorably sweet pic of our lil man.  I'm certain he's dreaming of wearing his cowboy boots and galloping me thru the fields out back :)
Later
Posted by Camryn at 6:45 AM