Camryn here:
It's a zoo around here, with 4 dogs, 1 cat, 5 kittens & me right?  So I don't quite understand why Mom & Dad went to a Zoo (Cleveland) today, when they have one right here!  Mom wanted to see the Giraffe's and the new (since last year ) Elephant Crossing exhibit.  I asked if she'd maybe bring a Zebra home for me, she said she'd try but, the Zebra's stayed pretty far away so that didn't happen SIGH.  She did of course bring tons of pictures home, a few with Zebra in the background. 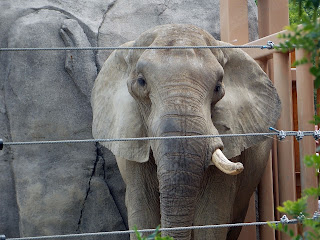 This was the Bull Elephant, he was out by himself later in the day.  Wonder if he thought the rock was hiding him? 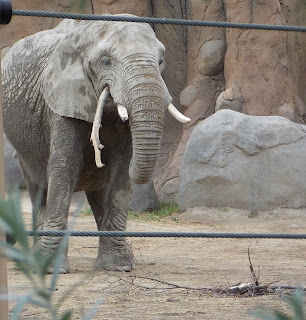 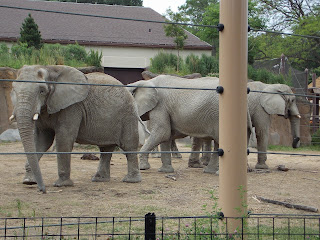 All the girls were out in the morning.  Mom thought the one facing her might be preggers.  Her really enjoyed their exhibit as it was spacious and they looked happy.  Their trick fence sounded VERY powerful, you could hear the click, click, click from a distance. 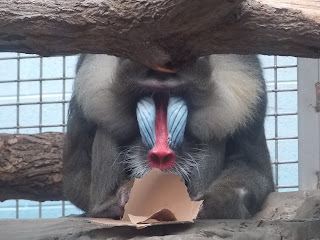 The baboon guy was sitting high above all his girl baboons right in the middle of the enclosure as if on a throne.  The cardboard box he'd just ripped apart was strewn out all around him.  Their enclosure was a typical Zoo enclosure but, Mom could see how the Zoo peoples tried to keep them from being way bored. 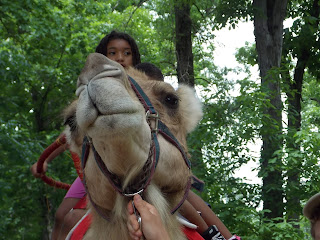 They had Camel rides, Mom didn't partake in this though she was tempted.  She felt bad for the Camels (there were four) as she was sure being led about in circles endlessly didn't make for a happy life.  They did only work two at a time while the other two rested awaiting their turn.  Also Mom took note that rides were in a nicely shaded area. 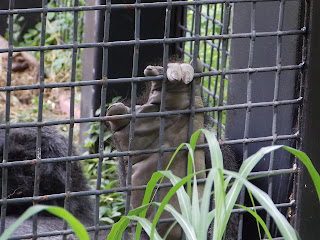 This was all she could see of the Gorilla's as they were sound asleep.  She loved checking out this ones feet anyway.  Biggify it, pretty cool! 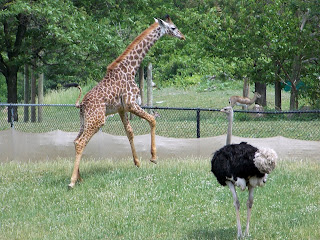 This baby Giraffe suddenly took off running away from it's Mom and was tearing around circling the Ostrich... 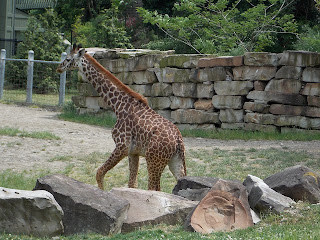 Mom Giraffe came a running.  The Ostrich who had been minding it's own business high tailed it outa there real quick like... 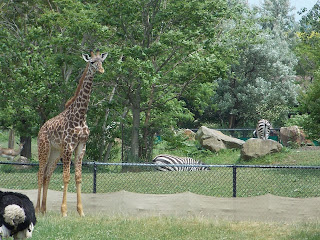 Ostrich is running for Dodge  and baby is like "Uh Oh, Mom's mad!"  Take note of the Zebra in the background.  I still want one... 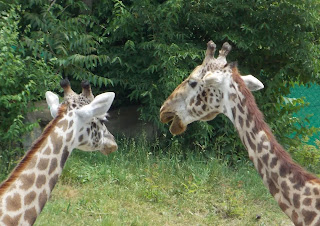 Mom is lecturing junior about proper Giraffe behaviour I think.  He even looks all "I'm sorry Ma" 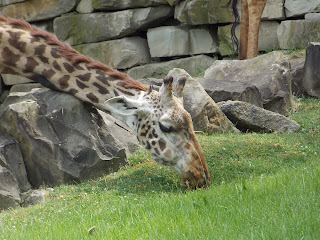 This guy was reaching out over the enclosure wall.  See, its true the grass is always greener on the other side!  Mom liked their enclosure too.
Later...
Posted by Camryn at 6:48 PM