Camryn here:
Yesterday Mom took Margaux to be fixed, though no one realized she was broken!  All I know is Margaux will no longer be a baby maker.  She's in the house recuperating for a few days.  In the meantime Onyx has his hands paws full big time.  He's taken it upon himself to be a substitute Momma kitty.  The kittens aren't to terribly apprecative... 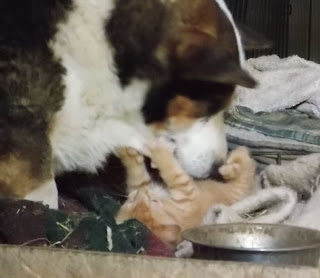 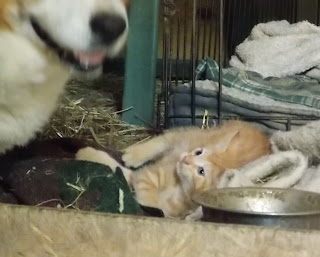 Onyx: "I've been watching Margaux, I know just what to do now" 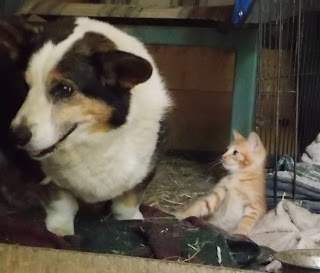 Kitten: "Hey Uncle I think you missed a spot!"
Onyx then moves on to his next victim kitten... 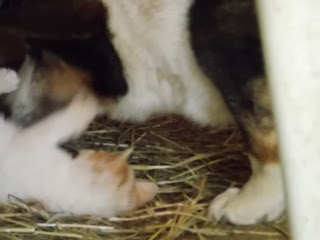 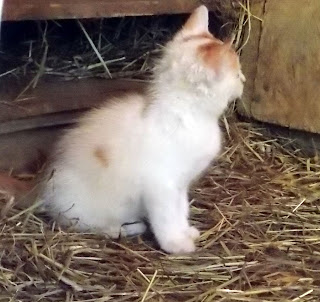 Kitten: " I never looked like this after Momma bathed me!"

Onyx moved from kitten to kitten making sure each had their bath! Things moved kind of fast making it difficult to photograph each victim kitten getting their turn. Not every victim kitten were as cooperative as these two!  Mom was trying to get pix of the two still needing homes to put on craigslist.  Unfortunatly she didn't feel the  "I got bathed by a dogs wet tongue" look would look to good!  Funny when Margaux bathes them they look vastly differant!

No kittens were harmed during their bathtime adventure

The kittens have been cuddling with Onyx during Margaux sabatical too.  I don't think I have to tell you all, Onyx is a very special dog with a heart of gold. He's always been nice to the kittens but, it's as if he understands their needs with Margaux being MIA right now.  Being a herding breed however his attempts to keep them rounded up are met with annoyance most of the time. Plus Onyx is a senior so the kids do wear him out, these guys only stop moving when their sleeping now. I'm so glad horses don't have litters!! At 7 weeks they've been eating both soft and hard food for several weeks, and of course drinking water and using the litter box.  Still as big as they are Marguax was still allowing them to nurse.  The Vet felt it wouldn't be wise to allow this for a few days, so Margaux is in the spare room up at the house lounging.
Mom would've waited till next week when three of the kittens leave for their new homes but, as Margaux had been out on a few "dates" she knew waiting to long would mean being fixed would've been more difficult on her.
Later
Posted by Camryn at 6:49 PM